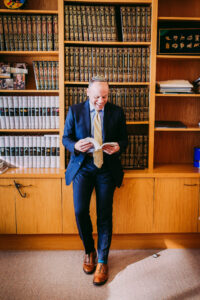 Rabbi Steven Abraham came to Beth El as Assistant Rabbi in July of 2011 and was named Beth El’s congregational Rabbi in August of 2013. He is the father to two beautiful children, daughter Naama and son Leor. He graduated from the rabbinical school at the Jewish Theological Seminary, where he also received an M.A. in Jewish Education. Before attending JTS, he earned his B.S. in Business Management from the University of Baltimore. Most recently, he earned a Certificate in Interfaith Families Engagement program at Hebrew College.

In college and rabbinical school, Rabbi Abraham was actively involved with USY as a group leader on multiple summer programs, including USY on Wheels and Summer in The City, and staffed NATIV.

Rabbi Abraham currently sits on multiple local and national boards. He is a member of the board of the Boys and Girls Clubs of the Midlands, the National Board of United Synagogue of Conservative Judaism, Israel Bonds National Rabbinic Advisory Council, is a founding Board Member of The Nebraska Religious Council for Reproductive Freedom and was recently selected to be a member of Leadership Omaha Class of 43.