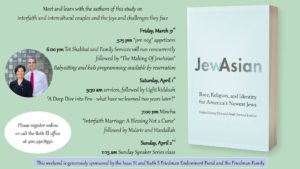 Of all the deep and meaningful conversations that took place this weekend, there were two conversations that continue to challenge me. The first was from a conversation on Shabbat morning that revolved around the question of why Jews have left Judaism. The question being what is our responsibility to the unengaged or non-affiliated Jews of Omaha. What resources should we put forth, how should we go about reaching out to them, and assuming we are able to get in touch, what type of experiences will we create that speak to this demographic.

It was mentioned very astutely during the session that as individuals who value synagogue life we look at those who are not engaged as if there are missing something. The comment was made they are hidden or in the closet, yet we must consider that these Jews may not feel hidden at all, in fact they may be proud to be Jewish but not engaged in the 1980’s sense of engagement, that being synagogue attendance. Now, I agree with this sentiment, I think those who give Judaism and by extension their synagogue community a chance, walk away with a greater sense of meaning and fulfillment in their lives…but that is my belief/opinion, it isn’t fact.

Let’s use Apple Computers as an example. While not a waste of marketing dollars Apple spends less money annually to switch PC users over to Apple products as opposed to engaging customers who already own Apple products to purchase another. I own a macbook, iphone, watch…etc from Apple…those that like Samsung or Android products believe they have a great product, a commercial telling them their product is inferior is futile. Further, it’s hard to imagine that someone out there has not heard of Apple, they have made a choice to use another product. We can judge their choice, but it is their choice.

The question is a similar one for the Jewish Community, which is how to diversify its experiences (its investments) to make the greatest impact. How does the Jewish Community creates a lineup of products that rival Apple? A commercial may not change minds…but hearing about a new product from a friend or colleague can make all the difference. Promoting programs in the Jewish Press, monthly newsletters, Facebook or twitter will perhaps, with no guarantee, touch those who are already involved, even peripherally (those that send their kids to the CDC, are members of the JCC, perhaps even members of the synagogue).

With finite amounts of time and money where do you spend those vital resources. Do you try and engage our current membership base or do we attempt to grow our customer base? It’s not a zero sum game, but tough questions that we need to answer.

The second question I walked away with this weekend is what does the Conservative Movement want its relationship to be with interfaith families. If you want interfaith families fully engaged then allowing membership, marriage and board participation seem like a natural means to their end goal. However, if that is not their end goal, it would be easier for the movement to simply say, “we are not open to interfaith families” and stop making small changes that do not make any qualitative changes towards the greater good as so many families see the prohibition against officiating at an interfaith marriage as the ultimate slap in the face.

If we want to say YES to membership, and YES to being on the bima for a baby naming or b’nai mitzvah and YES to reading an English prayer during services and YES to interfaith burial then how do we say, “we cannot do your marriage, but we want you to join our synagogue”? There are no easy answers, but we owe it to our children and grandchildren to continue to search for answers.