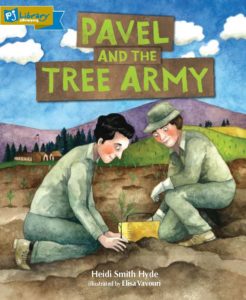 This evening, I had the pleasure of reading a bedtime story to my kids. Naama chose “Pavel And The Tree Army” by Heidi Smith Hyde (Author), Elisa Vavouri (Illustrator) which was sent to PJ Library Families in January 2019. The story follows the life of Pavel and his friend Anatoly, immigrants who came to America seeking a better life. These two men left their homes to take part in one of FDR’s greatest achievements, the Civilian Conservation Corp. While the Corp planted trees as well as built roads and bridges throughout the west, its goal was to provide work for thousands of young men, mostly from poor and immigrant families with jobs to help sustain them and their families.

In the middle of the book, Pavel and Anatoly have an interaction with another young man who questions whether they are real Americans because they do not know the newly designated national anthem. Over the next few pages, the two men are taught the song and cheerfully sing it with the rest of the men at a July 4th BBQ.

When we finished the book, Naama looked at the real-life picture of Conservation Corp members (authors note), from the 1930s, and remarked that they look like me, her father, her uncle, her grandfathers. These people were immigrants too, she asked, unfamiliar with the fact that we as Jews were once the unwelcome new members of society. The story ends with Pavel proudly saying to himself, “I am an American.” I cannot speak towards immigration reform, or how we as a country can make it happen, what I know is that immigrants built our country, many of them our parents, grandparents, and great grandparents. They did work that others saw as “beneath them” and broke their backs, making ends meet to better themselves, their families and their country.

There are apocryphal stories that the prophet Elijah will one day show up at our door, dressed in rags, asking for assistance; what will we do? Will we push him away or offer him a home. Will we hang a no vacancy sign on the door or offer him a place to earn a living and the opportunity to make a life for him and his family. Elijah, we are told never dies, he is present at Passover, after Shabbat, and at every brit milah. Perhaps the next time we see someone who we deem to be the “other,” we need to see the face of Elijah the Prophet and ask ourselves do we push this person away or do we offer them a key to the golden door.