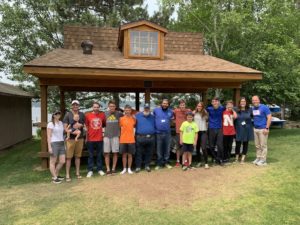 On the occasion of Seth Rich’s z”l 3rd Yahrzeit I had the honor being at Ramah as his friends and family dedicated a “roofball” court in his honor. Seth along with his friends at Ramah invented the game and the court will serve as a living memorial for years to come. 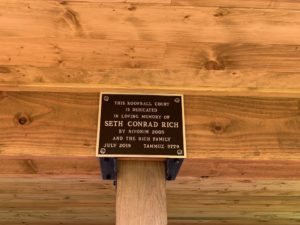 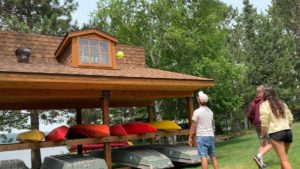 As a tribute to Seth and his family, I wanted to share my eulogy which included remarks from a number of his friends and family.

Our tradition teaches us to have hope in our darkest hours and to have faith in things not seen.

This has been a week that will test even the most devout souls. We search for answers to one of life’s most difficult questions of “why” and yet no answer can speak to the depth and breadth of our grief, no words lofty enough to dispel our pain.

In the book of Deuteronomy, we learn that even our greatest teacher Moses, was troubled with questions about the meaning of life and the mystery of death. Moses came to the conclusion: Hanistarot l’Adonai – “The mysteries belong to God” (Deuteronomy 29:28).

There are no answers for a young man gunned down in the prime of his life. All we have is questions of what could have been, what should have been and talk of potential greatness for which we will never bear witness. Yet in only 27 years Seth Rich made a difference in the lives of many and we honor his memory this morning.

We are here today to remember a young man who loved his family, his community and his faith. A young man who believed in our country, who believed that our best days as a nation are still in our future. A man who was willing to wear a panda outfit or dress up in red, white and blue when the time called for it. And perhaps most importantly, a man who believed that everyone in our country, no matter their economics, religion or the color of their skin had the right to vote.

We are here today to honor Seth Rich, for whom perhaps there is no greater legacy to leave than to acknowledge that he left this world a better place than how he found it.

Seth Conrad Rich was born January 3, 1989 to loving parents Mary and Joel Rich. Seth also had the deep love only brothers can share with his older brother Aaron and was overjoyed to be present at his brother’s wedding to Molly this past year.

Seth grew up here in Omaha attending the Friedel Jewish Academy, Beveridge Middle School and then going on to attend Central High.

I am told that ever since Seth was a little kid, he had an infectious personality. As a child he was willing to talk to anyone. If you were to leave him in a crowded room of strangers it would take only a short time before he would know everyone and they would know him. Whether it be making his rounds at weddings introducing himself to the invited guests, to overhearing a number of businessman talking and bringing his mother over as he thought she could help them with advertising, to stealing the mic to make a toast at a wedding reception. Seth loved being around people and people loved being around Seth.

In high school his charisma coupled with his intellect led him to be on the Central High Debate team which reached the national championships. Seth was also a member of the choir, the soccer club, and the student Democrats.

While Seth was always proud to grow up in Omaha and call Nebraska home, he spent his summers at his second home in Conover, WI. I would like to share with you some thoughts from the Director of Camp Ramah, Jacob Cytryn on his camper and collegue.

“Seth’s zest for life put him at the center of so much that camp had to offer; his energy was frenetic and contagious, his curiosity for ideas and, even more so, for people’s personalities, boundless.  Seth was an unassuming intellectual: he was an exceptionally bright adolescent and even as a rising high school junior displayed some of the interests that would lead him to his dual passions of public service and statistics, but he always seemed more at home in the games of adolescent boys, in planning elaborate pranks, on the sailboats and motorboats on Lake Buckatabon.”

“Many people I encounter seem to assume that the ideal alumnus of Camp Ramah is a Rabbi or Jewish scholar.  There is a much more powerful, compelling, and historically accurate case to be made for someone like Seth.  While his Jewish identity was central to who he was, it was but one part of his complex personality.  Seth combined the great pillars of our camp: being a great friend, a lover of intellectual pursuits, committed to unabashed fun, and an underlying allegiance to the Jewish people.  He was one of the great campers, an exuberant, roofball-playing, teenage mutant ninja turtle-dancing, light-and-sound-board-controlling platinum blond kid from Omaha with a massive heart and a brain and a soul to match.”

“On behalf of the hundreds of Ramahniks whom you touched during your summers here, the staff who worked with you as your camper, fellow campers, and the campers and staff you influenced as a staff member, we mourn the loss of a great and true Ramahnik.  Here in a place you knew as a home, your memory is already blessing those of us who knew you and who will remember you this week and forevermore.”

At Ramah Seth learned how to be a leader, how to care for others and how to stand up for his beliefs. It is clear from the outpouring of support from near and far the impact that Seth had on Ramah as well as the impact Ramah had on Seth.

Following high school Seth went on to attend Creighton University where he graduated with a BA in political science in 2011. I am told that Seth’s family was thrilled he was staying close to home, but a bit apprehensive for a nice Jewish boy to attend a Jesuit institution. It was at Creighton where his love of politics grew, serving on the Creighton Students Union for 2 years. While Seth was the nice Jewish boy on campus, with slightly different beliefs and practices than some of his catholic friends, the values that Creighton promoted were the same values he had been taught since he was a child. Father Hendrickson, it is an honor to have you with us today [President, Creighton University] in talking with Seth’s family, it was clear how proud he was to have graduated from Creighton.

While he was still a student at Creighton he worked for the US Census Bureau and the Nebraska Democratic Party and interned for Senator Ben Nelson.

After graduating in 2011, Seth was hired by a national polling company, Greenberg Quinlan Rosner and relocated to Washington, DC. Once again Seth surrounded himself with a caring community of friends, including his girlfriend Kelsey. Two years later, he went to the Democratic National Committee, where he worked on the development of a computer program that allows people to enter their names and have maps drawn to their polling places. It required data culled from every voter precinct in the country. Seth worked to boost turnout by connecting voters with resources like polling place locations.

“Our hearts are broken with the loss of one of our DNC family members over the weekend. Seth Rich was a dedicated, selfless public servant who worked tirelessly to protect the most sacred right we share as Americans – the right to vote,” she said. “He saw the great potential of our nation and believed that, together, we can make the world a better place.”

Seth may have loved to chat and make the rounds of a room, but more than anything he wanted to make the world a better place. As recent as this week Seth posted on Facebook:

‘I reiterate back to people stop hating each other. Too much pain to process.

‘We have to be better and defend each other more true.

‘A life is exponentially valuable. I have family and friends on both sides of the law.

‘Please, stop killing each other.’

Too often we see bloodshed and we avert our eyes because it is someone else’s neighborhood and someone else’s kid. Not today…today the anguish and pain that we so often see on the news is now in our own hearts. Seth did what he loved, he wanted to make a difference in the world around him and we owe it to his memory to finish the work Seth started.

Remember his name, said Donna Brazile, and add him to the rolls of justice. Seth Conrad Rich.

He lived to make a difference.

May his memory always be for a blessing