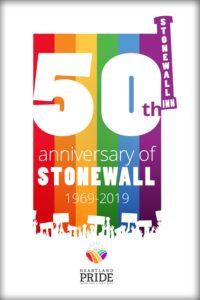 A few folks have asked me about the potential conflict of the synagogue taking part in the Heartland Pride Parade on Saturday, June 29 and the observance of Shabbat. I wanted to take the opportunity to share my thoughts on the topic. A few years back, a few congregants asked if the synagogue would publicize a walk, taking place on Shabbat to support cancer research. My initial thought was while I had no issue with folks participating in the walk, the question in front of me was whether the synagogue should publicize it. What struck me most was that the people who were asking, and being very considerate, were not folks who typically show up at services on Shabbat morning. They wanted to take part in something they believed was meaningful, and they understood a conflict existed and wanted to see what could be done to alleviate the issue.

As I sat and thought on the issue, the prophetic and all too often used line from Rabbi Abraham Joshua Heschel came to mind. As he was walking with Dr. King in Selma, he responded to a reporter who was asking a question saying that he was “praying with his feet.” How ironic that we use the line so often in our writing, yet how often do we act on Heschel’s prophetic words.

After a few days of thought, the decision became an easy one. First, I do not believe there is only one way to observe Shabbat. At its core, Shabbat should be a day held aside from the rest of the week, what that means in practice is unclear. I saw these individuals who were asking about the walk as seeking to turn Shabbat, a day that had typically been mundane, into a day pregnant with meaning.

When the question came regarding the Heartland Pride Parade, a few years back, the decision had already been made to allow the synagogue to publicize such programming (i.e., a walk/parade on Shabbat). The underlying question being asked was in regards to the theme of the parade, not whether Jewish Law permits participating. Beth El is proud to be a safe space for members of the LGBTQ community, where all are welcome to pray and participate as they feel comfortable.

On Saturday, June 29, there will be some who join me at Beth El in prayer and others who will be praying with their feet in the Old Market, whatever you decide you are honoring our prophetic tradition and Shabbat.

Learn more about the parade here 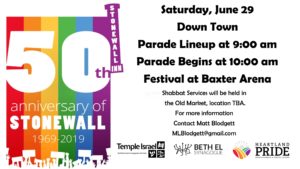