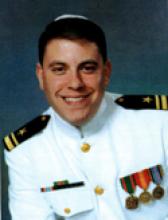 Today, in a few minutes we will do as Jews have done for centuries and take a break from the prescriptive ritual that makes up the Yom Kippur service to remember those individuals, friends and family that touched our lives.  We join together to honor their memory, by keeping it alive inside each of us.  It was only a few years ago that I even dared to enter the synagogue of my youth during the Yizkor service, blessed to still have two living parents and, thank God, two living grandparents, I believed myself to be exempt from this sacred time honored ritual.  That was until the fall of 2001, when a feeling of invincibility and innocence was shattered, and at the same time gave me, and so many others, a profound respect for living every day to its fullest.

I want to tell you about a man named Darin H. Pontell.  I wish I had the ability to stand here and call Darin a close friend, but we only knew each other for a few years, and he was 5 or 6 years older than I, and yet there is no question we were more than acquaintances.  What he was, was someone, whether he knew it or not, that profoundly affected my life and many others.

I didn’t have the pleasure of knowing Darrin till he was in his mid-twenties but what was clear from the moment we met, was that he was a one of a kind person, a caring soul with an incredibly warm heart.  Our paths crossed because Darin was dating a wonderful woman who was the older sister of a close family friend.  The couple had known each other since their early teens, I knew Darin from the occasional Rosh Hashanah dinner, family BBQ and Passover Seder.  What you need to know, is that Darin wasn’t like most guys, certainly not like most Jewish guys I knew growing up.  You see, Darin graduated from high school and entered The United States Naval Academy in Annapolis, MD.  Darin, I learned, had always wanted to be a Naval Officer and was commissioned as an officer upon his graduation from the Academy in 1998.

It was only a few years after his graduation that he got engaged.  I remember the aufruf a few weeks before their wedding, I had an aliyah right after Darin and I remember, like it was yesterday, being up on the bima together, whispering to each other during the Torah Reading.  I can’t say it any other way, “he was the guy that fathers want their daughters to bring home.”   Being a “family friend” I was lucky enough to be invited to the wedding.  It was one of the best weddings I can ever remember.  They were married at the synagogue where I grew up, outside Washington, DC.  Watching Darin and his closest of friends in White Dress Uniforms, swords and all, is something I will never forget.  Witnessing the bride and groom enter the party under an arch of Navy Swords, only to have the last sailor slap the bride on the “tush” with his sword and exclaim “welcome to the navy” to the singing of “You’ve Lost That Lovin’ Feelin’” by the groom…it was a wonderful night.

Memory is funny, some things in our lives we cannot remember no matter how hard we try…other things we remember as if they took place only a moment ago.  A blessing and curse is that we don’t chose that which we remember and that which we forget.

I tell you all of this because on September 11, 2001; Lt. Darin Howard Pontell was killed as he went about his day as an intelligence officer, working in the D-Ring of the Pentagon.  I remember that day, like many of you, like it was yesterday.  I remember attending Darin’s funeral and seeing all the same cleanly pressed white NAVY dress uniforms that I did six months earlier; but now the smiles and joy had turned to tears and sorrow.  I remember the folding of the flag, Taps being played, and not one person leaving the grave till it was covered to the top with earth.  It was the last measure of respect that anyone who knew him could bestow upon a man who died too young.

I remember attending shiva services and being honored that I was asked to lead.  I remember the chill that went through my spine every time we recited the kaddish.  I remember sitting watching dozens and dozens of visitors trying to pay their respects, trying to say “I’m sorry,” but what could anyone really say or do in order to make the pain the family felt lessen, even for only a moment.

Yet what I remember most about those conversations was that everyone, from his wife to his NAVY buddies to his sister-in-law all repeated the same story about how Darin led his life.  He led his life according to the motto “Learn as if you will live forever, and live as if you will die tomorrow.”  That line, now eerie to repeat, exemplified how Darin lived his life. It brought comfort to his closest friends and family knowing that Darin left them with a charge of how to live their lives.

Why am I telling you about Darin today?  This week we commemorated the 12th anniversary of that fateful September day. I would be remiss if I did not remember him. But on this day, as we are about to enter the service of “Memory,” the service of Yikor, it is this idea that Darin left his loved ones with that charge to “Learn as if you will live forever, and live as if you will die tomorrow.”

And so we must ask ourselves, what does it mean to live our lives in a manner that would make the people for whom we remember today proud?  How do we honor their memory in our own lives?

The Torah tells us “Moshe took with him the bones of Yosef, who had exacted an oath from the children of Israel, saying, ‘God will be sure to take notice of you: then you shall carry up my bones from here with you.'”(Shemot 13:19).

In the Gemara, Tractate Sotah, there is an amazing story, explaining how Moses remembered to bring the bones of Joseph with the Israelites as the exited Egypt.  We are told that Moses remembered the promise that had been made to Joseph and so he sought out Serah bat Asher, a woman who was remembered what had happened with the bones of Joseph.  She told Moses that his metal casket had been dropped into the Nile, spilling water into the plains where there had been a drought.  Moses immediately went to the bank of the Nile River, looked down at the water and said “Joseph, we wish to fulfill the oath that was made to you and take you out of Egypt, show yourself now are we are free from our obligation”.  At that very moment the casket of Joseph floated to the surface.

What does it mean to go back for the bones of an ancestor? In Hebrew, the word for bone is etsem, the same word that means essence or soul. We too carry the bones/essence of the people we remember.

The Talmud says that along with the Ten Commandments, the people of Israel transported the bones of Yosef through the wilderness. “In one Ark were the bones of the person who had lived by the commandments, that were sheltered in the other Ark.”

For many of us we honor those who have passed with names of subsequent generations.  My daughter, Naama Yocheved is named for two of her great-grandparents.  For others we carry trinkets as reminders: a grandfather’s watch, a great-aunt’s necklace.  Yet today I want to challenge us to think about the lives of those who we remember.  Do we conduct ourselves in a manner that would make them proud? Can their morals and values be their gifts to us?  When our time comes, what would they say of the totality of our lives? Better yet, what will our children say about us when we are gone?

We learn in the Gemara, in tractate Shabbat, the questions we will be asked upon our final judgment.  When we when come to the end of our days the text says we will be asked the following questions: Did you conduct your business dealings with integrity? Did you set aside fixed times for the study of Torah?  Did you concern yourself with the duty of raising a family?

To many this may seem like listing one’s daily grind rather than summarizing a life well lived.  But the mundane tasks, the to-do list, our daily routine IS life.  We work. We play. We love our families. It is not WHAT for which we are held accountable, but the HOW.

As we enter into Yizkor I would ask that you take a moment to close your eyes, and imagine walking into a room, perhaps a room in the home in which you grew up. Now shut the door and envision your beloved father or mother, husband or wife, sister or brother, son or daughter, other relative or friend. Look into their eyes, touch their hands and feel their skin. Listen to their voices.

What do we want to say that we didn’t when they were alive? Perhaps we will say “I am a new mother” or “new father” and then introduce them to the child they never met, or, show them how their little grandchild has grown since they left. [1]

I hope that as we enter Yizkor that you can take a moment to recognize what each person you are remembering today has given you, and take time to reflect upon HOW we are living up to their expectations.